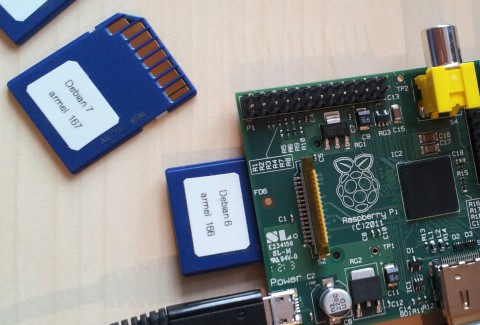 Outdated! May I point you to Raspbian Lite Image by the Raspberry Pi Foundation.

Seems that I’m one of these lucky guys already received their Raspberry Pi. I ordered it from RS on the 5th and got it on the 10th of May. Posted my unboxing on Google+.

But which distribution should I install? There are many on the downloads page. First choice was the Debian image, because I’m a Debian fanboy! Impressive, but its not Wheezy.

There is already a Debian Wheezy distribution available: Raspbian. But not all packages are ported yet. Let’s come back later.

Another choice is Chris Boot’s Debian Wheezy image with a Linux 3.2 kernel. He has also already prepared a pre-compiled binary for Debian. One great improovement of Chris‘ kernel is that IPv6 is enabled and its based on Linux 3.2! In the meantime, also the stock Raspberry Pi kernel got IPv6 enabled.

By the way, if your Raspberry Pi always hangs during boot at:

Then just take an other SD card and it would boot like a charm. Hopefully. 🙂

Ok, I also could have upgraded Debian Squeeze to Wheezy, but I’d like to have a basic system without anything, so I decided to debootstrap my own image.

I’ve developed a script which generates the SD card for your Raspberry Pi on your Desktop PC. You can download it from kmp.or.at/~klaus/raspberry. There you can also download a recently generated image.

Before you start, you should have installed some packages:

As only parameter give the blockdevice of your SD card (like /dev/sdc) and run it as root.

Or just leave the parameters and the script will produce an image file.

If you have created an image, just put it with the following command onto your SD card.

Plug the SD card into your Raspberry Pi and power it up. It should boot up with DHCP and the root password is raspberry (what else? 🙂 ).

Enjoy your basic, virgin Debian Wheezy on your Raspberry Pi. Any comments are welcome.